skip to main | skip to sidebar

When on Google Earth 26

Q: What is When on Google Earth?
A: It’s a game for archaeologists, or anybody else willing to have a go!

Q: How do you play it?
A: Simple, you try to identify the site in the picture.

Q: Who wins?
A: The first person to correctly identify the site, including its major period of occupation, wins the game.

Q: What does the winner get?
A: The winner gets bragging rights and the chance to host the next When on Google Earth on his/her own blog!

I took an interesting tour along the Euphrates, and identified this site:

So here's the follow-up, which, you might guess, is a little more recent (I'm sorry, I had to crop the scale as the image credit was too revealing). 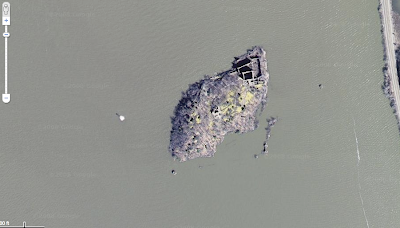 I have no sense of how tricky or easy this might prove for people, so I'm going to leave it up without comment for a little while, but I do have a series of clues lined up...

1. It's a little outside my usual archaeological remit (continent).

3. It was actually destroyed by fire, though has a past association with explosives...

4. I don't believe that it's been subject to any excavation, though it is apparently in the process of being conserved.

5. It's not in Scotland, though there is a Scottish connection.

6. The neighbouring bank has a small clue to location too.

I'm trying to upload a broader view, but blogger is not currently cooperating. I'll try again later.
Posted by Unknown at 05:51